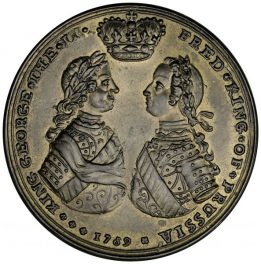 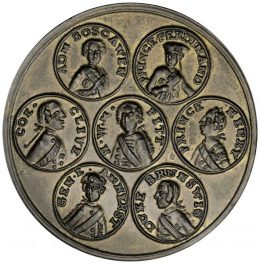 Obverse of this medal features busts of King George II and King Ferdinand of Prussia facing each other. Both wear armor, laurel crowns, and have their wavy hair tied back. A crown sits at the top center of the medal. The legend reads, “King George II. Frederick of Prussia.” The reverse features seven busts, two, three, and two. The names, read clockwise, starting at 1 o’clock, “Prince Ferdinand, Prince Henry, Duke Bunswig, Admiral Boscawen, Colonel Clive, and General Amherst” and the center medal is for Prime Minister H. William Pitt. All the commanders named fought for the English or Prussian dominance somewhere, making this medal celebratory of recent French and Prussian victories.