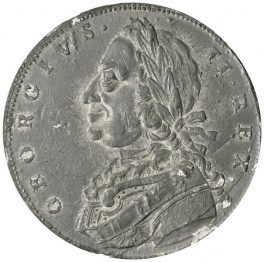 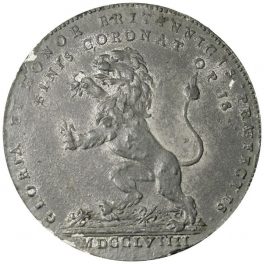 This rare medal possibly celebrates the British victory over the French fleet at Belle-Isle, but there is no solid proof to verify that assumption. Obverse features George II facing to the left, wearing armor, star of the Garter, and a laurel crown. His title in Latin on the legend translates, “George II, King”. The reverse displays the English lion, standing on hind legs and destroying the French lilies that lay underfoot. The legend translates, “Glory and honor to the British commanders. The end crowns the work, 1759.” This medal lacks an artist signature on both sides.