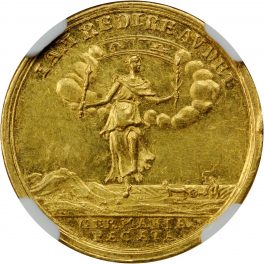 History, Information, and Value of 1763 Treaty of Hubertusburg Medal

Value of 1763 Treaty of Hubertusburg Medal

This medal commemorates the peace treaty signed by Prussia, Austria and Saxony signed at Hubertsburg in 1763, which ended the Seven Years War. Obverse displays Peace with trumpets flying over the Stadt house. The legend translates, “The messenger of Peace” and in exergue, “The 15th day of February, 1763.” The reverse displays Peace standing in a field holding a scepter and wheat. Around her face is a circle of clouds and the signs of Virgo and Leo are seen above her head. In the background, a man can be seen plowing his fields. The legend states, “Now she dares return. Germany at peace” and in exergue, “February 15, 1763.”