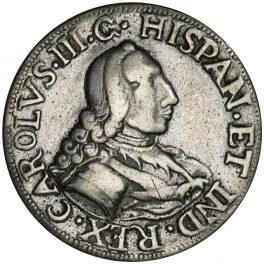 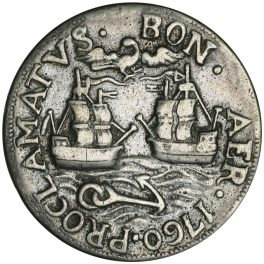 This medal proclaims Charles III as ruler over Buenos Aires. The obverse displays a bust of the new Spanish king, Charles III, facing to the right wearing a wig, armor, the Golden Fleece, and draped cloth. The legend translates, “Charles III, by the grace of God, King of Spain and the Indies”. The reverse legend states, “Proclaimed at Buenos Aires.1760”. The reverse pictures the arms of Buenos Aires; two ships sailing in the opposite directions. In the foreground is an anchor and high above the ships flies an eagle.