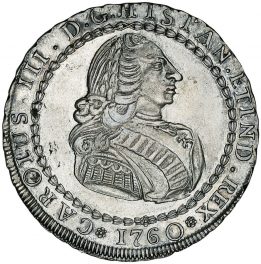 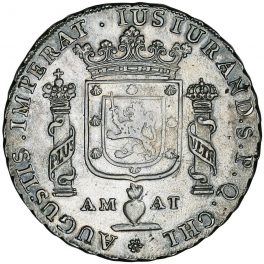 Value of 1760 Proclamation over Chile Medal

This medal proclaims Charles III as ruler over Chihuahua. The obverse displays a bust of the new Spanish king, Charles III, facing to the right wearing armor, a laurel crown, and his wig tied back with a bow. The legend circles a wreath of laurel leaves and translates, “Charles III, by the grace of God, King of Spain and the Indies”. The reverse legend states, “The Senate and people Chile [take] the oath [of fidelity] to the august rulers, [the King and Queen].” Centered on the reverse is a shield, which depicts a roaring lion. A crown tops the shield and two columns also topped by crowns flank the shield.