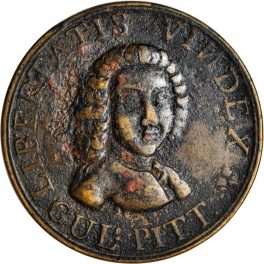 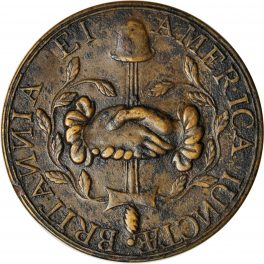 William Pitt was revered by the American Colonists and his fellow Englishman for his arguments for the common man, which gave rise to his nickname, “Great Commoner”. This medal possibly commemorates the repealing of the Stamp Act, which was in enacted in November 1765 and repealed in March 1766. Obverse displays a detailed bust of Pitt facing three-quarters to the right, while wearing a wig and a coat. The legend translates, “William Pitt, the defender of Liberty” with every “n” reversed. The reverse displays two hands shaking in the center of a circle of olive branches. Behind the hands is a sword, the point topped by a liberty cap. The reverse translates, “Britain and America united.”