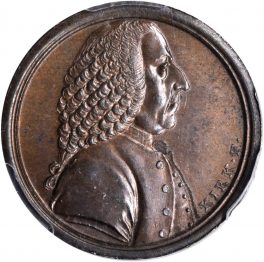 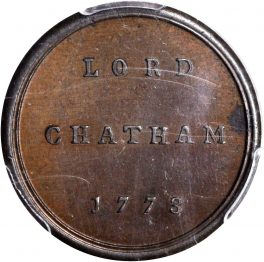 William Pitt was revered by the American Colonists and his fellow Englishman for his arguments for the common man, which gave rise to his nickname, “Great Commoner”. This commemorative medal honors William Pitt. Obverse displays a detailed bust of Pitt facing to the right, while wearing a wig and a coat. The obverse does not have a legend. The reverse lacks an image and simply states, “Lord Chatham 1773”. This medal was one out of a series of thirteen that were given away from a magazine titled, “The Sentimentalist”, published 1773-75, hence the later date on this particular Pitts medal.