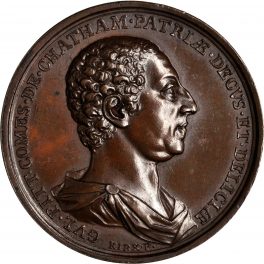 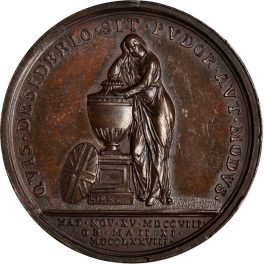 History, Information, and Value of 1778 Death of William Pitt, the Lord Chatham Medal

Value of 1778 Death of William Pitt, the Lord Chatham Medal

William Pitt was revered by the American Colonists and his fellow Englishman for his arguments for the common man, which gave rise to his nickname, “Great Commoner”. This commemorative medal honors William Pitt upon his death in 1778. Obverse displays a detailed bust of Pitt facing to the right, dressed as a Roman, complete with a toga, broach and short, cropped hair. The legend translates, “William Pitt, Earl of Chatham: The glory and the beloved of his country.” The reverse legend translates, “Why should there be any shame or limit to our regret at his loss. November 15, 1708 _ May 11, 1778.” Reverse depicts a woman weeping, while leaning against an urn. A British shield rests against the urn and is inscribed with the artist’s name, Kirk F.