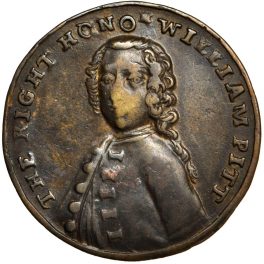 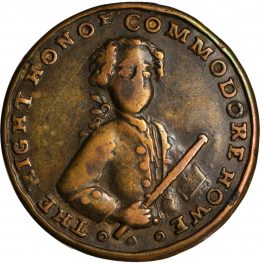 History, Information, and Value of 1778 Pitt and Howe Medal

William Pitt was revered by the American Colonists and his fellow Englishman for his arguments for the common man, which gave rise to his nickname, “Great Commoner”. This commemorative medal honors William Pitt and Commodore Howe. Howe was a commander of British forces in the Americas during the Revolutionary War and was known for his sympathies with for the Colonies. Obverse displays a bust of Pitt facing to three-quarters to the right, wearing a suit, a wig tied back with a ribbon, and carrying a baton in his right hand. The legend states, “The right honorable William Pitt.” The reverse legend translates, “The right honorable Commodore Howe.” Reverse depicts Howe, standing three-quarters to the left, wearing a suit and wig.