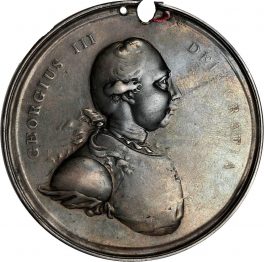 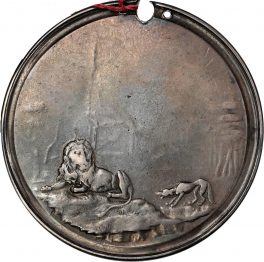 History, Information, and Value of 1777 George III The Lion and Wolf Medal

Value of 1777 George III The Lion and Wolf Medal

Obverse of this medal features George III, wearing armor, the ribbon of the Garter, and a wig. The legend around his head reads, “George III, by the grace of God.” Reverse displays the British lion sitting under a tree on a hill in the forefront of the medal. A small wolf barks at the lion to the right. Several trees and shrubs are to the right of the wolf. The background displays a church and two houses. The reverse of this medal lacks a legend. This was an Indian medal, given by the British, but the tribe it was bequeathed to is unknown although sources say the medal was taken from a Pontiac grave.

The obverse and reverse text read as follows: George III Dei Gratia | and | No Legend.