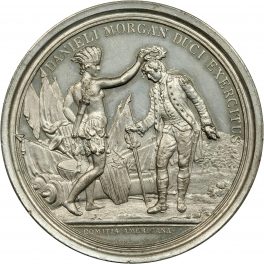 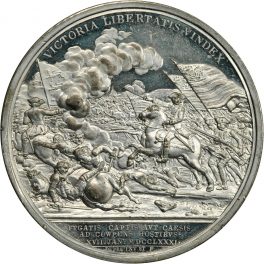 History, Information, and Value of 1781 Daniel Morgan at Cowpens Medal

This meal commemorates the Battle at Cowpens in 1781. Obverse features an Indian Queen, draped, and setting a wreath of laurel on American General Morgan’s head. Behind the Queen are the trophies of war, such as flags, cannons, trumpets, and shields. The legend reads, “The American Congress to Daniel Morgan, General of the Army.” The reverse displays General Morgan on a horse as he leads the troops into battle. In the left foreground, the attack is visible. The legend translates, “The enemy put to flight, captured, or slain, at Cowpens, Jan. 17, 1781.” This unique medal is generally offered with the obverse and reverse separate and was engraved by Augustin Dupre_, who also engraved the famous Libertas Americana medals.