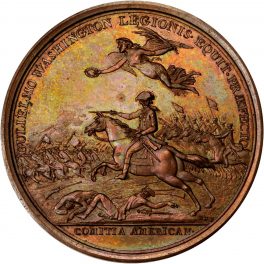 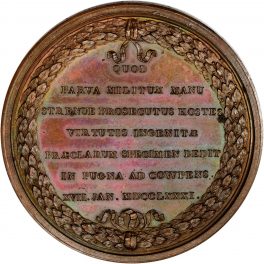 This meal commemorates the Battle at Cowpens in 1781. Obverse features William Washington on horseback on the left of the medal. His sword is in his right and he follows a standard-bearer. Above them flies Victory who carries a laurel crown and a palm branch. The legend reads, “The American Congress to William Washington, Commander of a Regiment of Calvary.” Reverse displays a palm wreath and inside an inscription, which reads, “Because with a small band of soldiers he energetically pursued the enemy and gave an example of native valor, in the battle at Cowpens, Jan 17, 1781.”