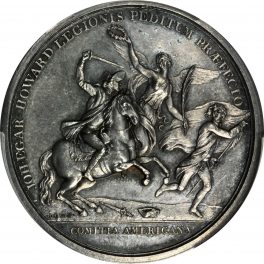 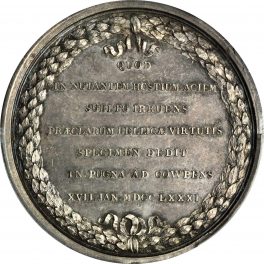 This meal commemorates the Battle at Cowpens in 1781. Obverse features Colonel John Howard, on horseback on the right of the medal. His sword is in his right and he follows a standard-bearer. Behind them is the battle and above them flies Victory who carries a laurel crown and a palm branch. The legend reads, “The American Congress to John Egar Howard, commanding a Regiment of Infantry.” Reverse displays a palm wreath and inside bears an inscription, which reads, “Because suddenly rushing upon the wavering line of the enemy, he gave an example of distinguished martial valor, in the battle at Cowpens, Jan 17, 1781.”