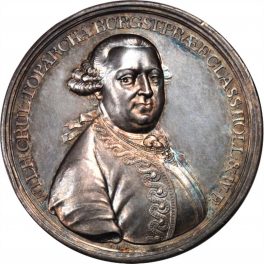 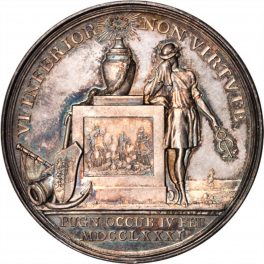 History, Information, and Value of 1781 Death of Admiral Crul Medal

This medal commemorates the valor of William Crul, Heer van Burgst, Admiral of Holland who died during the battle of St. Eustatia. The obverse features a bust of van Burgst, facing thee-quarters to the right, wearing a laced coat and wig. The legend reads, “William Crul, Heer Van Burgst, Admiral of the Fleet of Holland and West Frisia.” The reverse displays an urn upon a pedestal. The pedestal displays a tablet with an image of the battle on it. To the right stands Mercury weeping with his hand over his face. To the left of the pedestal are an anchor, shield, cannon, and flag. The legend on the reverse reads, “Inferior in strength, but not in valor. He fell, fighting, Feb. 4, 1781.”