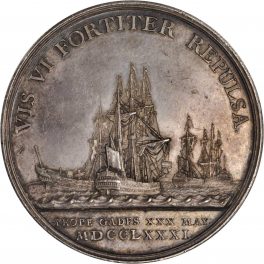 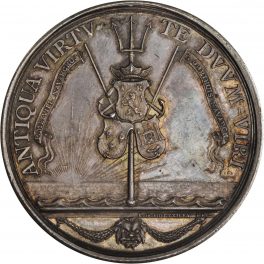 History, Information, and Value of 1781 Naval Victory Over Britain Off Cadiz Medal

Value of 1781 Naval Victory Over Britain Off Cadiz Medal

This medal commemorates the fight off of Cadiz between two Dutch and two British ships. The obverse of the medal states, “Violence bravely repelled by force.” The image on the obverse depicts four ships fighting a naval battle. The exergue translates, “Near Cadiz, May 30, 1781.” The reverse depicts Neptune’s trident with the sun on the left. The trident holds the shield of Admiralty, which bears a lion rampant holding a sword and arrows and is topped by a crown. Two anchors flank the shield and below them are two more shields, the one on the left bearing three fleurs-de-lis and the right depiction a house. The legend reads, “By the old time valor of two men” and at the bottom the die-cutter’s name, “I.G. Holtzhey. Fec. “