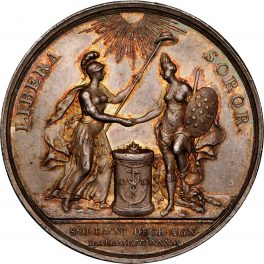 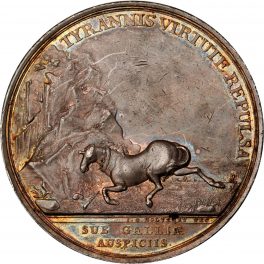 This medal commemorates John Adam’s visit to Holland. On the obverse depicted is an Indian Queen on the right wearing armor, headdress, and a shield with thirteen stars. Behind her is a lion, which she steps on with her left foot. To the left is another woman as Holland, wearing armor and holding a staff topped by the hat of freedom. Between them is a burning altar and above them shines the sun. The legend reads, “A Free Sister” and in exergue, “acknowledged by solemn decree April 19, 1782.” The reverse depicts a barren landscape with a large rock at the left. In the forefront lies a unicorn with a crown around its neck and its horn broken by the rocks. The legend reads, “Tyranny repelled by valor under the auspices of France” and the artist’s signature at the bottom right, I.G. Holtzhey Fec.

1782 Recognition of the United States Medal

Treaty of Commerce Between Holland & US Medal