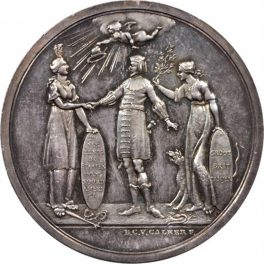 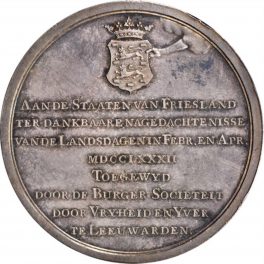 History, Information, and Value of 1782 Recognition of the United States Medal

Value of 1782 Recognition of the United States Medal

This unique medal from Frisia recognizes the United States as independent from Britain. Obverse depicts four individuals: one in the center is a Frisian in ancient armor who reaches for a native woman who symbolizes American as she rests her left hand on a shield that states, “The United States of North America”. To the right is the fourth individual who symbolizes Great Britain as she holds out an olive branch and rests her left hand on a shield that states, “Great Britain”. Above their heads flies the fourth individual, an angel that carries the hat of the Netherlands to the native woman. The artist signed the obverse with his name B.C.V. Calker. The reverse simply displays a shield bearing the arms of West Frisia and eight lines of Dutch that translates, “To the States i.e. the Legislature, of Friesland, in grateful recognition of the Acts of the Provincial Assembly, held in February and April, 1782. Dedicated by the Civic Society for Liberty and Glory,’ at Leeuwarden.”