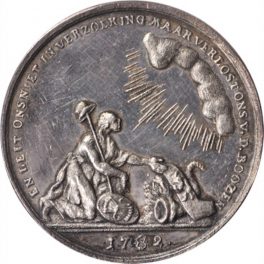 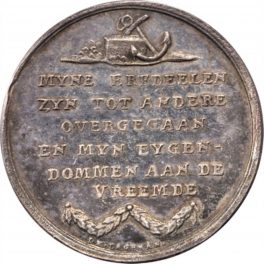 History, Information, and Value of 1782 Loss of Saint Eustatius Medal

This medal displays the loss of St. Eustatia by the Dutch to the English in 1782. Obverse features a woman, deemed to be Holland, kneeling to the right, as she leans against a staff topped by the hat of the Netherlands. She points towards the horn of plenty in front of her while behind her a the sun hides behind a cloud so that the sun’s rays illumine the scene. The legend reads, “Lead us not into temptation, but deliver us from evil, 1782.” The reverse bears only a six -line inscription that reads, “My inheritance has gone to others, and my property to strangers.