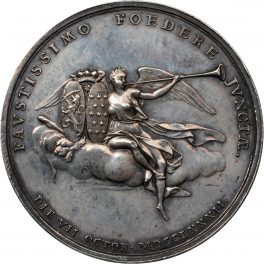 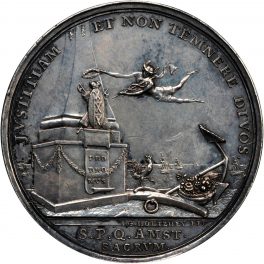 History, Information, and Value of 1782 Treaty of Commerce Between Holland and the United States Medal

This beautifully detailed Dutch medal was created by Johann Georg Holtzhey, the most prominent Dutch medalist of the age in honor of open commerce between Holland and the United States. The obverse depicts a winged Fame blowing a trumpet on a cloud as she leans against two crowned shields for Holland and America. The shields are crowned and resting on a resentful lion. The legend reads, “United by a most auspicious treated, Oct. 7, 1782.” The reverse legend reads, “Learn justice and not to despise the gods. By the Senate and people of Amsterdam”. Depicted on the reverse is a pyramid shaped monument upon which are hung garlands. A large anchor rests to the right upon which a rooster, who symbolizes France, trots. A winged Mercury flies overhead and places a wreath on a shield on the monument.

Treaty of Commerce Between Holland & US Medal