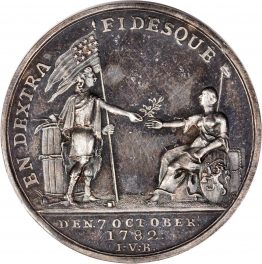 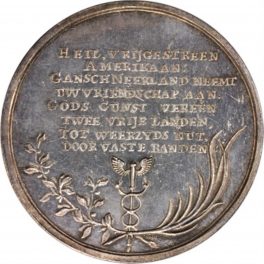 This beautifully detailed Dutch medal symbolizes the goodwill between the Dutch and the newly created United States. Obverse depicts a woman on the right, sitting on a pile of goods and extending her right hand. On the left, a man in classic dress reaches out an olive branch in his right hand. Behind the man stand the American flag and a barrel full of Indian corn. The legend translates, “Behold, here is my right hand, and the pledge of my good faith. 7 October 1782.” The reverse displays eight lines of text above a caduceus, an olive branch, and a palm branch. The text reads, “Hail to you, American, who have fought out your freedom: All Netherlands accepts your friendship. God’s grace unite two free lands, to mutual good, through solid ties.”

1782 Treaty of Commerce Holland & the US Medal