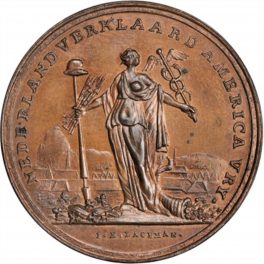 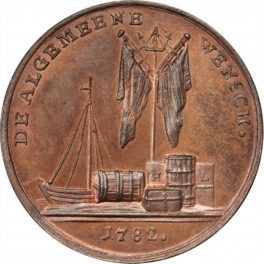 This medal displays the goodwill between Holland and America. Obverse features a woman in draped, classical dress, as she carries a caduceus, a spear, seven arrows, and a hat. At her feet are a cactus and the horn of plenty and behind her are hills and houses. The legend translates, “Netherlands declares America free” and in exergue gives the artist’s name as J.M. Langeman. The reverse displays a ship with a single mast and several barrels around a trident that acts a flagpole for the flags of America and the Netherlands. The legend reads, “The universal desire” with the year 1782 in exergue.