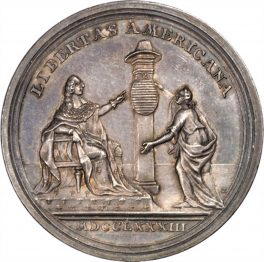 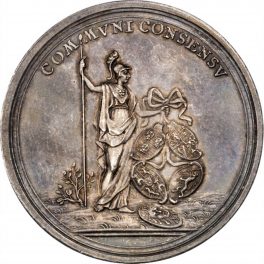 History, Information, and Value of 1783 Peace of Versailles and Libertas Americana Medal

Value of 1783 Peace of Versailles and Libertas Americana Medal

This medal commemorates the signing of the Peace of Versailles, which officially ended the Revolutionary War between the English, the French, the Spanish, the Dutch, and the Americans. Obverse depicts Louis XVI on the left, in his court robes pointing at a shield that bears thirteen bars that Liberty just put up. A liberty hat tops the post the shield rests on. The legend reads, “American Liberty 1783”. The reverse depicts Pallas with a spear and five shields that represent a different European country. The reverse legend reads, “By common consent.”