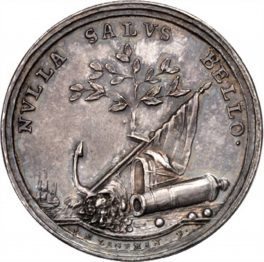 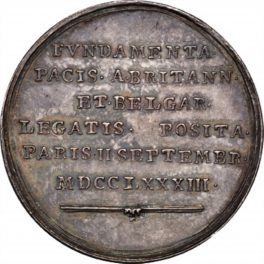 History, Information, and Value of 1783 Dutch Treaty of Paris Medal

This medal commemorates the signing of the Treaty of Paris, which ended the Revolutionary War. Obverse depicts an olive tree on the right and further to the right are instruments of war such as drums, banners, cannons, and balls. To the left are an anchor and a cornucopia full of coins. In the distance sails a ship. The legend reads, “No safety in war.” The reverse displays a six line inscription that translates, “The preliminaries of peace settled by ambassadors of Great Britain and the Netherlands at Paris, Sept 2, 1783.”