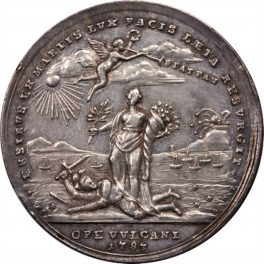 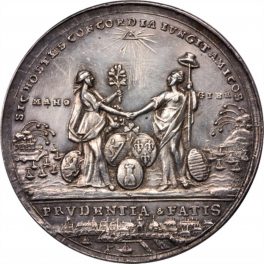 This medal commemorates the signing of the Treaty of Paris, which ended the Revolutionary War. Obverse depicts Peace, holding an olive branch, shaking America’s hand. Between the two women are three shields for Great Britain, France, and Spain. Behind Peace is the shield for the Netherlands with a rampant lion and behind America is a striped shield. Flanking the two women are two forts for Port Mahon and Gibraltar. A fortified town is in the exergue. The legend reads, “Thus concord unites enemies as friends” and in exergue, “By Prudence and the Fates.” The reverse Peace holding an olive branch and horn of plenty as she steps on War personified as a man with a sword. Overhead flies an angel with a wreath and a trumpet. The legend reads, “From the clash of arms, the joyful light of peace rises again” and in exergue, “Let there be peace.”