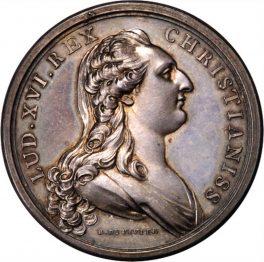 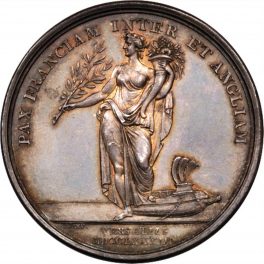 This medal commemorates the signing of the Treaty of Paris, which ended the Revolutionary War. Obverse depicts a bust of an older Louis XVI, facing to the right in his royal robes, a wig, and the Order of the Golden Fleece. The legend states, “Louis XVI, Most Christian King.” The reverse depicts Peace in the center, holding an olive branch and horn of plenty. Her right foot rests on a galley. The legend reads, “Peace between France and England, at Versailles, 1873.” The artist B. Duvivier signed the obverse and the reverse bears the signature of Duviv.