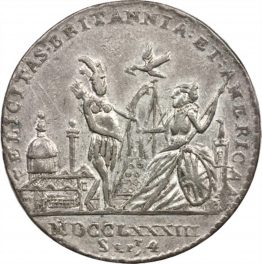 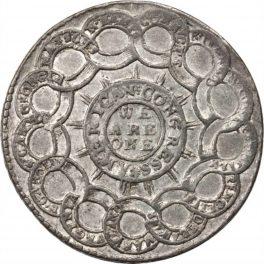 This rudely crafted medal commemorates the signing of the Treaty of Paris, which ended the Revolutionary War. Obverse displays Britannia sitting on the right, shield leaning against her. She holds a spear in her left hand while she extends her right to an advancing Indian Queen. The Queen carries a cow, quiver and wears a feathered headdress. Between the two women flies a dove and behind them can be seen London with St. Paul’s Cathedral appearing as the dominant building. The legend reads, “Happiness, Britain and America” and in exergue, September 4, 1783. The reverse displays a chain of thirteen rings for each of the original colonies. A center ring states, “American Congress” on it.