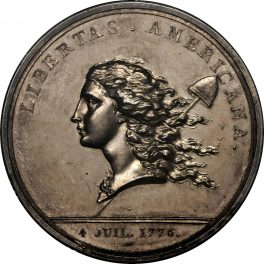 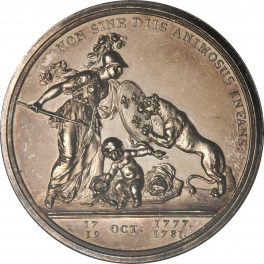 Benjamin Franklin was the mastermind behind the conception and execution of this unique medal. While the medal celebrates American liberty, it also compliments the French and their invaluable aid to the new nation. The obverse displays Liberty’s head, facing to the left with her hair flowing behind her and a liberty cap on a pole behind her head. The legend reads, “American Liberty” and in exergue, July 4, 1776. The reverse displays a baby, as the infant Hercules in a shield-shaped cradle, killing a snake with each hand. To the left stands Minerva as France, repelling off a British lion with her shield. The legend reads, “The infant is not bold without divine aid” and in exergue the dates, 17/19 Oct. 1777/1781.