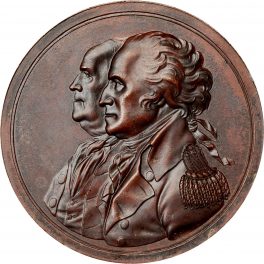 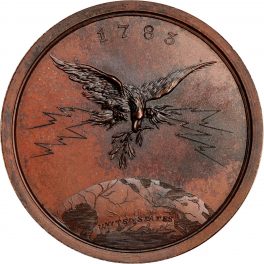 Benjamin Franklin was the mastermind behind the conception and execution of this unique medal. While the medal celebrates American liberty, it also compliments the French and their invaluable aid to the new nation. The obverse features a bust of Benjamin Franklin and George Washington, both facing to the left. There is no legend on the obverse, but both men are recognizable. The reverse displays an eagle flying over a sphere. In the eagle’s talons are bolts of lightning and an olive branch is in his beak.

The obverse and reverse text read as follows: No Legend | and | United States.