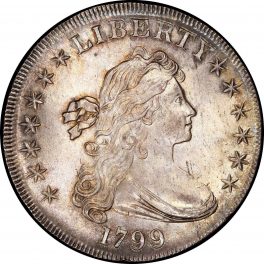 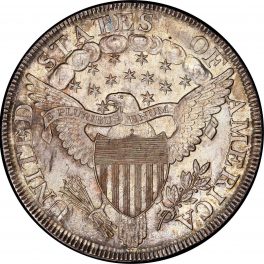 This Dollar has the catalog numbers: Bowers Borckardt-164, Bolender-17, or Haseltine-17

Obverse: The obverse is the same as BB-156.
Reverse: Five extremely large berries in olive branch, the largest on any 1799 dollar. The two upper berries are partly buried in the leaves. Point of star enters eagle’s mouth, upper part of beak closing down on star. The point of the star almost touches lower part of beak; ray points to left edge of left serif of U in PLURIBUS. Leaf points near left corner of I in AMERICA. A does not touch feathers. Very short stem in claw; shortest stem on any 1799 reverse. Peculiar raised die flaws resembling an equal sign are at an angle under the star that straddles clouds 2 and 3. An incuse die mark at the upper left corner of the leftmost cloud is present on the early die state; the second S in STATES is repunched at the inside of its lower loop. Far right edge of A is over junction of clouds 3 and 4. The letters in E PLURIBUS UNUM seem larger and in some instances differently proportioned on this reverse, in comparison to the other reverses of the year.
Total Estimated Population: 550 to 950