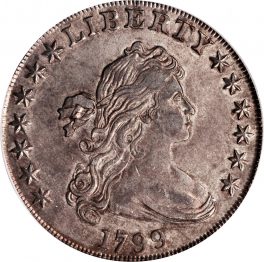 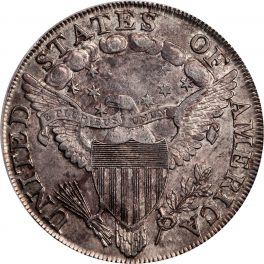 This Dollar has the catalog numbers: Bowers Borckardt-165, Bolender-8, or Haseltine-8

Obverse: Liberty with open mouth. First star is slightly farther from curl than last star is from bust, or about 2 mm. from curl. The seventh star is slightly closer to L than eighth star is to Y. There is a die chip between star 9 and the border. Star 10 is slightly repunched on its innermost ray. On the left, the stars are fairly evenly spaced. On the right, stars 10 and 11 are significantly closer than any of the others. Highest curl on top of head is centered more under right half of E in LIBERTY. The 1 in date is much farther from the curl, slightly over 1 mm. The letters in LIBERTY are usually seen with varying degrees of bifurcation, sometimes extensive, suggesting to Bolender that the letters were “fancy.”
Reverse: Die flaws inside and to right top of final S in STATES. Far right edge of A is over junction of clouds 3 and 4. Point of star touches point of lower part of eagle’s beak; ray points to left of left upright of U in PLURIBUS. Leaf points slightly right of center of I in AMERICA. AME join at lowest part. The N in UNITED was initially cut upside down and later corrected; an extraneous serif from the error can be seen to the lower right of the N, and appears as a line between the bottoms of N and I.
Total Estimated Population: 600 to 1,000