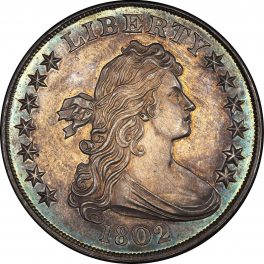 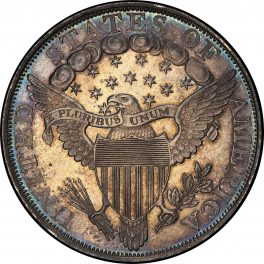 History: First struck at the Mint in the mid-1870s from an obverse die made before autumn 1834 and from a reverse made in the early 1830s. Intended for sale to numismatists. Struck in the same time period, but just before the 1803 novodels were struck. The mintage was probably no more than eight, of which four or five can be traced today. This may be very slightly more available than the 1803. Even the greatest collections of the past were apt to lack an example.

Obverse: The 2 in date is curled at top, differing from any original obverse, and of the same “fancy” or curlicue style seen on certain 1820 half dollars. Star 1 is about the same distance from the second curl as star 7 is from L. The star positioning is cruder than any original dollar of this date. On stars 1 to 7, all points closest to adjacent stars are misaligned! Obviously, whoever made this die was not accustomed to this work. On the right, the stars are aligned better, but this is ruined by something else that never occurred on an original of this date: stars 12 and 13 are so close that they actually touch at their inner points! Highest curl centered below the E in LIBERTY. Raised border with denticles made up of truncated beadlike denticles quite unlike the toothlike denticles of original dollars of the Draped Bust type. Original 1, 8, and 0 punches from the early 1800s were used to make the die. 2 copied from one of the “Fancy 2” digits used on half dollars of the 1820s. Perfect die without cracks.
The top left curl tip is intact on the 1802 novodels, whereas on the 1801 and 1804 issues it is missing. Thus, the 1802 and 1803 dies were made before the others.
Reverse: The same reverse die was used here as on the 1801 Proof Restrike.
Total Estimated Population: 8