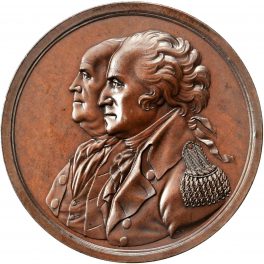 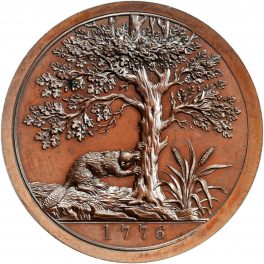 This medal celebrates both George Washington and Benjamin Franklin. The obverse features a bust of each man, both facing to the left. There is no legend on the obverse, but both men are recognizable. The reverse does not have a legend either, but the year 1776 is in the exergue. Featured on the reverse is a tall oak, tree, which a beaver is gnawing on. To the right are reeds and cattails. Struck in high relief at the U.S. Mint in Philadelphia, the date on the medal lists 1776, although they were probably put into circulation around 1807.

The obverse and reverse text read as follows: No legend | and | No legend.