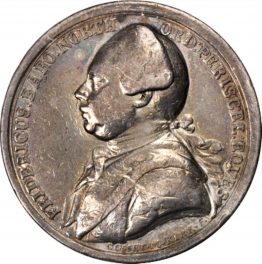 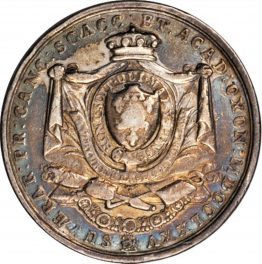 From 1770-82, Frederick North was the Prime Minister of Great Britain. This medal depicts signatures on the back from Isaac Gosset and John Kirk, the former a wax modeler, and the latter a die maker. The obverse of the medal depicts a bust of North, facing to the left wearing a wig tied back with a ribbon and a coat. The legend around his head reads, “Frederick, Baron North, Knight of the Order of the Garter.” The reverse legend states, “First Lord of the Treasury, Chancellor of the Exchequer, and of Oxford University. The reverse depicts an elliptical shield, backed by drapery, encircled by the Order of the Garter, and topped by a crown. The shield bears three fleurs-de-lis and a lion. At the base of the shield, crossed, is a caduceus and a mace.