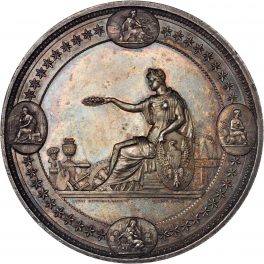 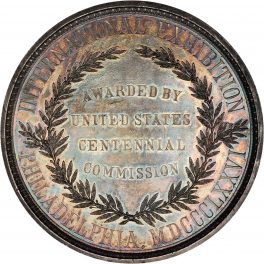 This medal was the Centennial Award. It sought to show Columbia, who is seated on the obverse, as the goddess of this award. The small circles around her represent Europe, Asia, Africa, and America. There is no legend, but merely the signature of the artist on the obverse which reads, “HENRY. MITCHELL. SC, DES & SC. BOSTON U.S.A.” The reverse displays a wreath surrounding and surrounded by the legend which reads, “INTERNATIONAL EXHIBITION, PHILADELPHIA MDCCCLXXVI; AWARDED BY THE UNITED STATES CENTENNIAL COMMISSION.” Records do not state the exact number of medals struck.