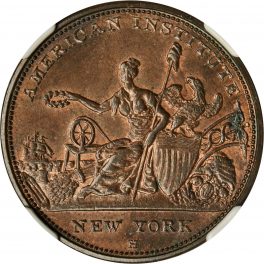 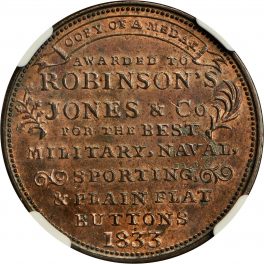 This token typically receives the Hard Times Designation of HT-153.

The obverse text reads “American Institute New York H” and the reverse text reads “Copy of A Medal Awarded to Robinson’s Jones & Co For the Best Military, Naval, Sporting, & Plain Flat Buttons, 1833.” The obverse of the token shows an image of a woman sitting on a throne surrounded by a shield, eagle, sceptre, and ship, and the reverse has text with a banner above and branches to the sides.