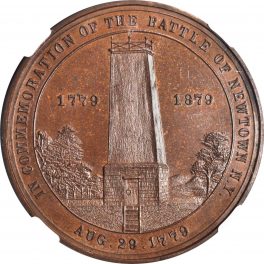 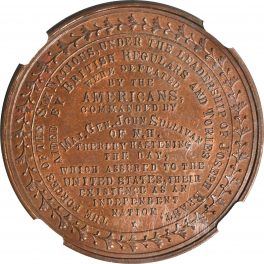 Diameter: 40.00 mm
Mintage/Proof: NA / 0
Weight: NA
Metal: Bronze
I Own 1879 So Called Dollars Commemorative and Exposition
Add To My Collection
View My Collection

This So-Called Dollar is given the catalog number HK-123

The obverse text on this So-Called Dollar reads In commemoration of the battle of Newtown N.Y. Aug. 29 1779, 1779 1879 and the reverse text is The forces of the Six Nations, under the leadership of Joseph Brant, aided by British Regulars and Tories were defeated by the Americans, commanded by Maj. Gen. John Sullivan of N.H. thereby hastening the day, which assured to the United States, their existence as an Independent Nation. The front side of the coin shows a large pyramid shaped monument in the center with a door on the lower portion, surrounded by trees, and text all around. The backside of the coin depicts lines of text describing the events that happened in war that year, as well as a leafy wreath surrounding the entirety of the text.