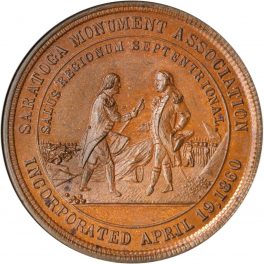 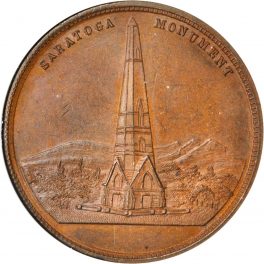 Diameter: 35.00 mm
Mintage/Proof: NA / 0
Weight: NA
Metal: Bronze
I Own 1877 So Called Dollars Commemorative and Exposition
Add To My Collection
View My Collection

This So-Called Dollar is given the catalog number HK-119a

The obverse text on this So-Called Dollar reads Salus Regionum Septentrional, Saratoga Monument Association Incorporated April 19, 1860 and the reverse text is Saratoga Monument. The front side of the coin shows two men shaking hands in the center, the two men are the British General Burgoyne and U.S. General Gates as the British General surrenders, text surrounding the scene. The backside of the coin depicts a monument in the center with landscape in the background, with a single line of text arching above.