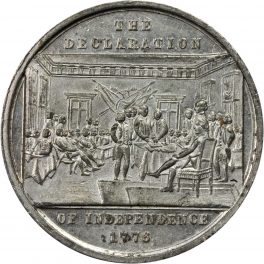 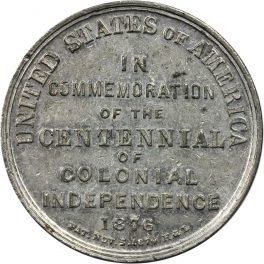 Diameter: 43.00 mm
Mintage/Proof: NA / 0
Weight: NA
Metal: Tin
I Own 1876 So Called Dollars Commemorative and Exposition
Add To My Collection
View My Collection

This So-Called Dollar is given the catalog number HK-74

The obverse text on this So-Called Dollar reads The Declaration of Independence 1776 and the reverse text is United States of America in Commemoration of the Centennial of Colonial Independence 1876 Pat. Nov. 3 1874 H & L. The front side of the coin shows a scene held within a rectangular box that shows the signing of the Declaration of Independence with the men signing in the room. There are several men standing in the center with others sitting in the background and two lines of text at the top and bottom. The backside of the coin depicts ten total lines of text all centered on the Dollar.