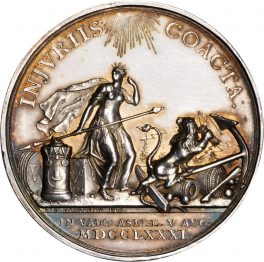 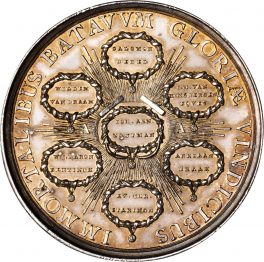 This medal commemorates the battle of Doggersbank, which took place on August 5, 1781 and was fought between the Dutch and the British navy. The Dutch won and created this medal to commemorate their victory. The obverse features a crowned woman looking to the left while carrying a lance in her right and pointing upwards with her left. Behind her burns an altar and to her right, an anchor rests on a pile of war trophies. A rampant lion, with arrows in his right paw climbs the anchor, while looking back at the woman. The legend reads, “Compelled by injuries” and in exergue, “On the Doggersbank, August 5, 1781.” The reverse displays seven wreaths in front of rays of light. Each wreath has a name of a Dutch captain. The names read, “Salomon Dedel; Willem Van Braam; I.H. Van Kinsbergen; Ioh. Arn. Zoutman; W.J.Baron Bentinck; Adrian Braak; Ev. Chr. Staringh” and the legend around the scene translates, “Seven Dutch vessels won a victory over nine English ships, August 5, 1781.”