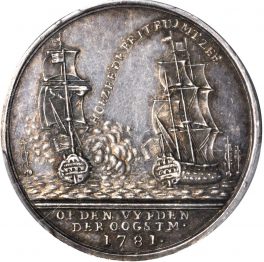 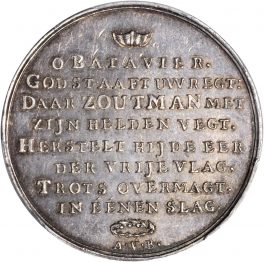 This medal commemorates the battle of Doggersbank, which took place on August 5, 1781 and was fought between the Dutch and the British navy. The Dutch won and created this medal to commemorate their victory. The obverse features an image of the battle with two ships fighting. The legend reads, “Huzza! Britain abandons the sea!” and in exergue, “On the 5th of August.” The reverse lacks an image and states, “Oh Batavians, God sustains your right; Zoutman, by his heroic valor, has restored the honor of the free flag, and overcome arrogance in this battle.”