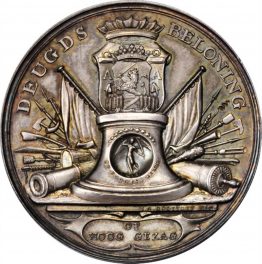 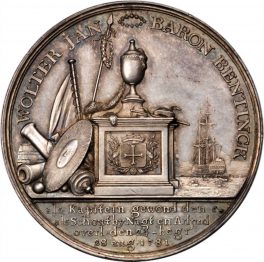 This medal commemorates the battle of Doggersbank, which took place on August 5, 1781 and was fought between the Dutch and the British navy. The Dutch won and created this medal to commemorate their victory. The obverse features an urn and a cypress wreath on a square pedestal that boasts a tablet inscribed with a shield and cross for the arms of Bentinck. To the right of the pedestal is a ship on the horizon and to the left are trophies of war such as cannons, flags, and shields. The legend names, “Wolter Jan Baron Bentinck” and the exergue translates, “Walter John, Baron Bentinck; wounded as Captain on the 5th, died as Rear Admiral and Aide on the 24th; buried Aug. 28, 1781.” The reverse displays a rounded pedestal upon which rests a shield topped by a crown. The shield bears the arms of a crowned, rampant lion that holds arrows and a sword. The arms of war, such as cannons, flags, arrows, knives, swords, and spears flank the pedestal. The legend states, “Recompense of valor” and at the bottom of the tablet, “For Doggersbank”, while the exergue states, “By high authority.”