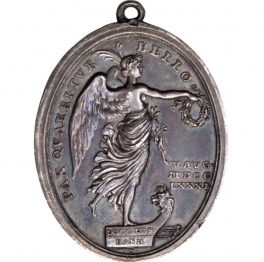 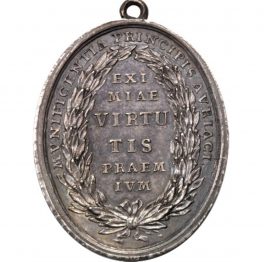 This medal commemorates the battle of Doggersbank, which took place on August 5, 1781 and was fought between the Dutch and the British navy. The Dutch won and created this medal to commemorate their victory. The obverse features a winged Victory facing to the right holding a laurel wreath in her outstretched right hand, and palm and olive branches in her left. She stands on a galley, which has seven arrows projecting from the front. The legend states, “Peace is sought by war” and Doggersbank” featured on the prow, underneath which is the letter “S” for the engraver. The reverse displays a laurel wreath crossed and tied with a ribbon at the bottom and inside the inscription, “By the liberality of the Prince of Orange” and “The reward of distinguished valor.”