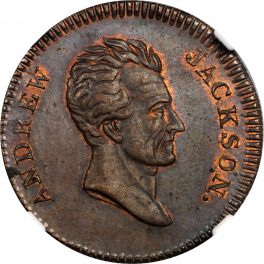 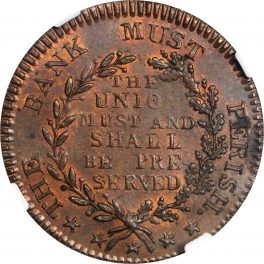 Although it is dateless, the Jackson Aged Head Hard Times Token was minted in 1832. The token is a slight variation of previous versions, and that variation can be found within the locks of the hair. Do not expect to find a fully struck coin, because all of these strikes are rather weak. There will be significant wear on the high parts of the token. Stacks Bowers has sold several of these coins. The best coin fetched $40,250 and another brought in $38,187.50. This token typically receives the Hard Times Designation of HT-3.