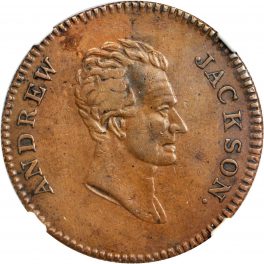 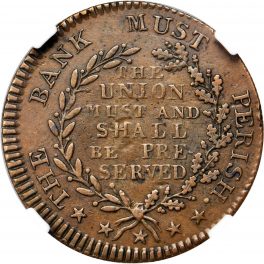 This dateless token was most likely created in 1832. The token has diagonally reeded edges and features the “Small Head” designation. This Jackson Small Head Hard Times Token can be deferientated from the Scowling Head and the Aged Head. The best way to recognize this token is by the first, third, and fourth locks of hair on the top of the head. The mouth is also evenly placed between the chin and nose. Stacks Bowers has sold one of the finer versions of this coin with a realized price of $14,950. This token typically receives the Hard Times Designation of HT-1.