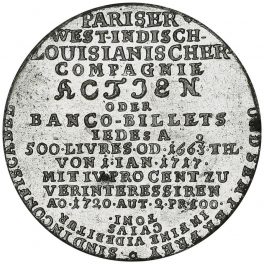 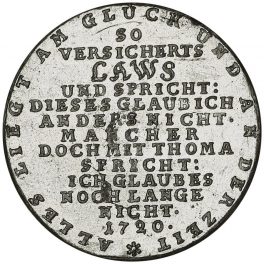 John Law, a promoter of questionable speculative enterprises in the Americans for the French, is negatively depicted in this medal. The medal displays text on both sides, warning about Law’s deceitful schemes. Obverse states, “Shares or certificates of stock of the Parisian West Indian Louisiana Company were valued at 500 livres each, or 166 2/3 thalers, on Jan. 1, 1717 and yielding four per cent interest: in 1720, two shares for 100 libres. They cannot be confiscated and are always free. In the end it will be seen what is the value of this story.” Reverse states, “Everything depends on luck and time. So Laws declares and says: I hold exactly this belief; many a one, however, says with Thomas, I do not yet believe it entirely.”