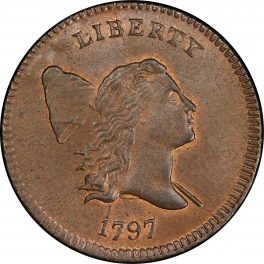 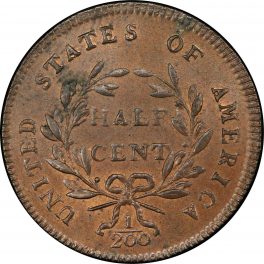 History, Information, and Value of 1797 Liberty Cap Half Cent

W-1 | 1 above 1 in date | C-1, B-1a, 1b, and 1c | Breen dies: 1-A. | This popular variety had the 1 of the date punched high in the field though the erroneous digit was never eliminated when the date was repunched in a more central manner below Liberty’s bust. 1797 Liberty Cap Half Cent, W-1 is found on thin planchets with some 400 to 600 pieces extant, and on thick planchets with perhaps 900 to 1,200 pieces extant, making for a variety that is easily found in most grades up to and including EF, though beyond that it is highly elusive with but a few Mint State coins known. This Philadlephia Mint variety is one that is sometimes found on cut-down Talbot, Allum & Lee tokens and cut-down large cent planchets. The reverse die of the variety has berries displayed five to the left and three to the right. 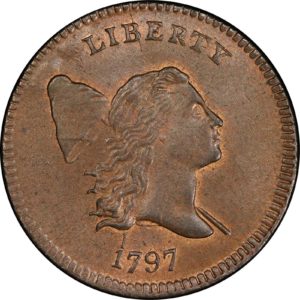 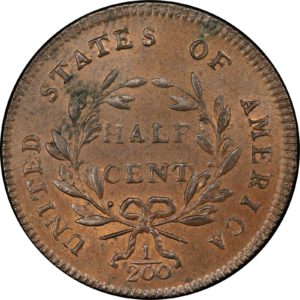 W-2 | Regular Head / Plain Edge | C-2; B-2a, 2b, and 2c | Breen dies: 2-A. | The known population for the 1797 Liberty Cap Half Cent, W-2 is split into three groups, including those on thin planchets with some 250 to 400 pieces known; thick planchets with no trace of an undertype enjoying some 50 to 75 pieces extant; and the rarest of the three, thick planchets with traces of a cent undertype, of which perhaps just eight to 12 coins are known. Low date on the obverse die, reverse same as the preceding. Eight or more examples of the variety are known in Mint State grades though the vast majority of survivors are VF or lower on the scale. 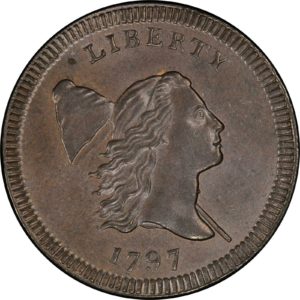 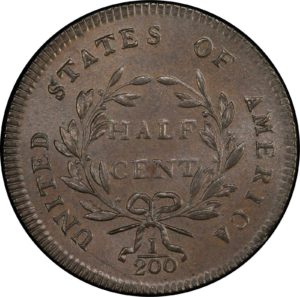 W-4 | Low Head / Gripped Edge | C-3c, B-3b | Breen dies: 3-B. Usually seen in low grades and with surface roughness. The edge has widely spaced irregular vertical lines, the purpose of which is unknown. | Far and away the rarest of the 1797 half cent varieties, the curious Gripped Edge style is found on about a dozen to 15 examples of which a VG specimen is the finest known! The elusive 1797 Liberty Cap Half Cent, W-4 shares the same obverse and reverse die as the preceding variety. The “gripped” edge shows widely and irregularly placed curved and vertical lines that are unique to this rare half cent. 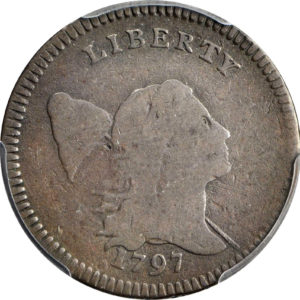 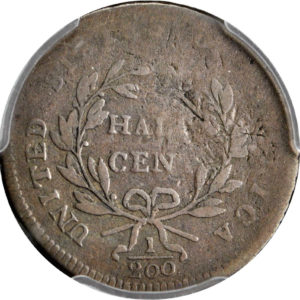 W-3 | Low Head / Lettered Edge | C-3b, B-3a | Breen dies: 3-B. Usually seen in low grades and with surface roughness. | It is thought that just 75 to 100 or so examples of the 1797 Liberty Cap Half Cent, W-3 variety are known. Obverse with Liberty’s portrait low in the die and crowding the date below, reverse with four berries to left and three to right. The only variety of 1797 half cents with the lettered edge style, W-3 is eagerly sought as a type coin as well as a scarce half cent issue. The typical grade is Good or VG, and collectors are happy to own this elusive variety in any grade. 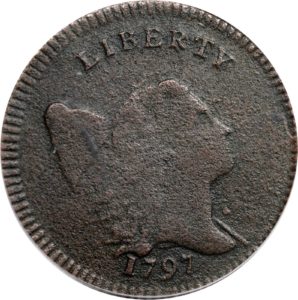 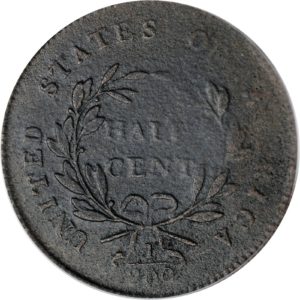 W-5 | Low Head / Plain Edge | C-3a, B-3c | Breen dies: 3-B. Thin and thick varieties. Usually seen in low grades and with surface roughness. | 1797 Liberty Cap Half Cent, W-5, the final variety of the date is one of the more readily available varieties among 1797 half cents. Some 400 to 600 coins are estimated with AG to VF, with EF and finer coins available only occasionally. This variety comes on thick or thin planchets.

Value of 1796 Liberty Cap Half Cent

Value of 1800 Draped Bust Half Cent