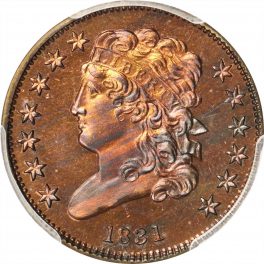 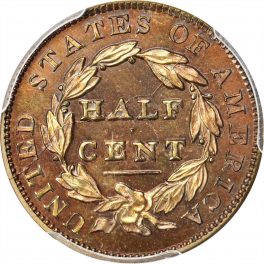 History, Information, and Value of 1831 Classic Head Half Cent

W-1 | Original | C-1 (for Proof, EO-5), B-1 | Breen dies: 1-A. Reported circulation strike mintage of 2,200 coins may represent coins from earlier dies, although these would have had a slightly different border. While some worn coins may be spent Proofs, it is significant to note that no coin has ever been found with traces of circulation-style mint luster. The borders of the half cent were modified slightly this year. It is thought that some 40 to 55 examples of the 1831 Classic Head Half Cent, W-1 variety are extant, all struck in the calendar year. Many of those show signs of circulation but with no “circulation strike” qualities. On the obverse the 8 is smaller but its base is higher in the die than the other numerals. The reverse has large berries and the tip of the highest leaf is under the right edge of the final S in STATES. This die would appear again as W-1 of 1832. Survivors of this rare date are known with bright mirrorlike surfaces as well as matte-like bronzed surfaces as often seen on Mint medals of the era. The original half cents of 1831 give the famous 1796 a run for the money in the rarity department. This coin was minted at the Old Philadelphia Mint. 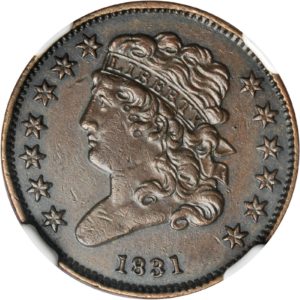 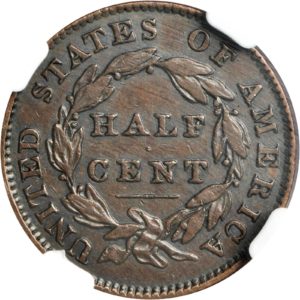 W-2 | Restrike from the same obverse die, Reverse of 1836 | C-PR-2, B-2 | Breen dies: 1-B. | Perhaps 35 to 50 examples of the 1831 Classic Head Half Cent, W-2 are known, mostly as circulated Proofs. The obverse is the same as the preceding. The reverse die with large berries and the tip of the topmost leaf under the lower left serif of the final S in STATES appears for W-1 Proofs of 1836, its first use. This variety was no doubt made especially for collectors who found original 1831 half cents highly elusive. 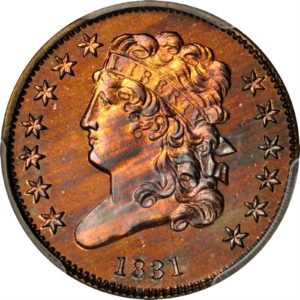 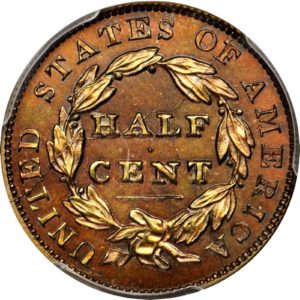 W-3 | Second Restrike die, Reverse of 1840 | C-SR-25, B-3 | Breen dies: 1-C. | The final entry in the 1831 Classic Head Half Cent, W-3 rarity sweepstakes is known in small numbers with somewhere between a half dozen and a dozen or so specimens extant today. From the same obverse die as the preceding but from the “Reverse of 1840” die, a newer style with small berries and devices by Christian Gobrecht. It is believed these were struck in 1859 or later for collectors of the day. In an 1866 auction catalog, J.N.T. Levick noted “These were restruck at the Mint in quantity in 1860.” 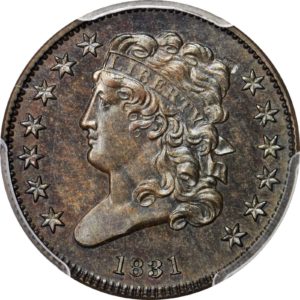 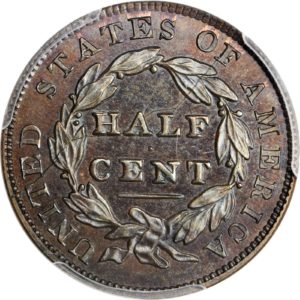 The text on the obverse of the coin reads “Liberty, 1831” and the reverse text on the Classic Head Half Cent reads “United States of America, Half Cent.” The obverse of the coin shows a womans bust facing the left with 13 stars surrounding her head and the date below. The reverse shows a full wreath surrounding the text in the center. These coins come in many varieties, so we recommend contacting one of our rare coin experts. If you are looking to sell coins, we can always help by giving you a rare coin appraisal. Coin appraisals are free of charge, so just send us a picture and one of our old coin experts will be in touch with you. We have the best rare coin price guide, and you can always trust us with your business!

Value of 1829 Classic Head Half Cent

Value of 1832 Classic Head Half Cent