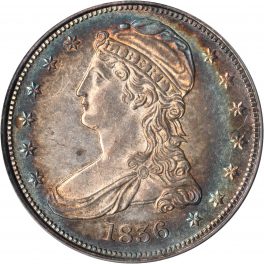 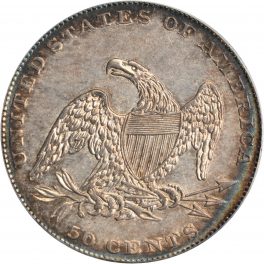 History, Information, and Value of 1836 Capped Bust Half Dollar

Guidelines for Collecting:The 1836 Reeded Edge half dollars are the first U.S. coins struck by the new steam press. Although cents had been coined by steam power earlier, half dollar production did not begin until November 1836. Walter Breen first suggested a possible mintage of _1,200?” in his Complete Encyclopedia of U.S. and Colonial Coins and that figure has unfortunately been repeatedly published as fact rather than an estimate. Today, with third-party certification companies and easily accessible auction records, most numismatists agree this figure is far too low. A better estimate is slightly fewer than 5,000. Due to its low mintage, the 1836 has always attracted attention. Most examples of the issue are well struck. Only one obverse and reverse die pair is known.
Availability: While it is not hard to find an example in the marketplace, finding a choice, unimpaired piece can be a challenge. Careful selection is very important. Both circulated and Mint State pieces are available, with the majority of pieces in the mid circulated grades with light impairments. In upper AU to Mint State the issue is quite a bit scarcer and examples do not come to market as often. All Proofs are very rare.

Value of 1795 Flowing Hair Half Dollar