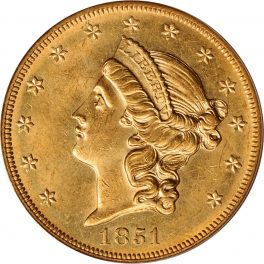 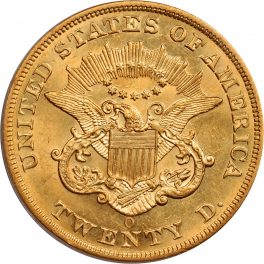 Minted in significantly lower quantities than the Philadelphia issue of the same year, though posting a mintage figure nearly double that of the next most common issue from the New Orleans Mint. 1851-O $20 double eagles have a strike that is overall sharp and among the most well produced issues from New Orleans in particular. Examples are readily available in circulated grades up through lower levels in the About Uncirculated category, becoming very scarce at the Choice AU level. Mint State coins are very rare, with fewer than two dozen examples qualifying, none of which grade finer than MS-63.