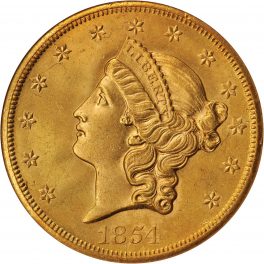 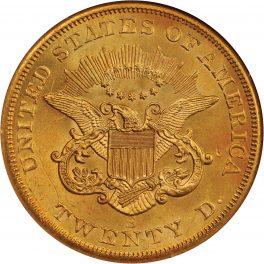 The 1854-S $20 double eagle was the first Liberty Head double eagle minted in San Francisco. In October 1854, the Independent Steamship Companys S.S. Yankee Blade was shipwrecked off the California coast after getting caught on a submerged reef in thick fog. The vast majority of passengers and crew made it to safety, but the ship sank with valuables, including a brass cannon and $152,000 in specie, including 1854-S double eagles, to its watery grave. More than a century later, in 1977, salvage divers discovered artifacts from the S.S. Yankee Blade, including 200 to 250 specimens of 1854-S gold $20 coins. With an estimated 300 to 500 examples remaining in circulated condition, the 1854-S $20 is scarce but attainable with some persistence. There exists a moderate population of 200 to 300 Mint State coins as noted, the majority of which come from the wrecks of the SS Yankee Blade and, to a lesser extent, the SS Central America. However, many of these Uncirculated pieces from the Yankee Blade are marred by saltwater exposure, and locating an example with wholesome, original surfaces presents a true challenge to collectors.